Home How to Avoid Permanent 123 Parenting

How to Avoid Permanent 123 Parenting 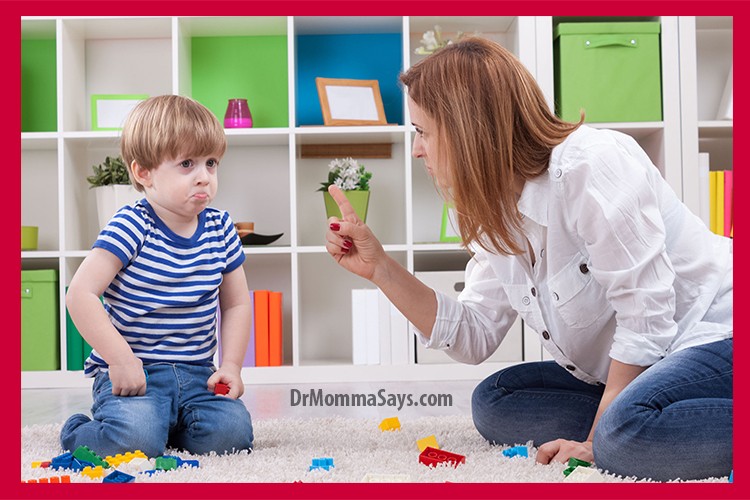 How to Avoid Permanent 123 Parenting

First, let’s just say there are millions of parenting techniques and there are good and bad parts of each. My advice is always that you should just “do you” and keep moving forward. But today, I want to suggest that it is important that you take some time to evaluate your results. No one knows what is working for your kids except you.  I am here to let you know that 123 parenting may have a role for many toddlers, but at some point, it needs to end.

123 parenting was not a thing when I was a child. Act up, immediate consequences! Period. Yup, the good old days complete with spanking. (I know that is taboo now,  but it is what it is.) Then in the 90s, when my kids were young, the “time out” was all the rage. Although I had never personally experienced it, I was up to try it with my kids.  Worked for many parents, but did it work for my kids? Not a chance. 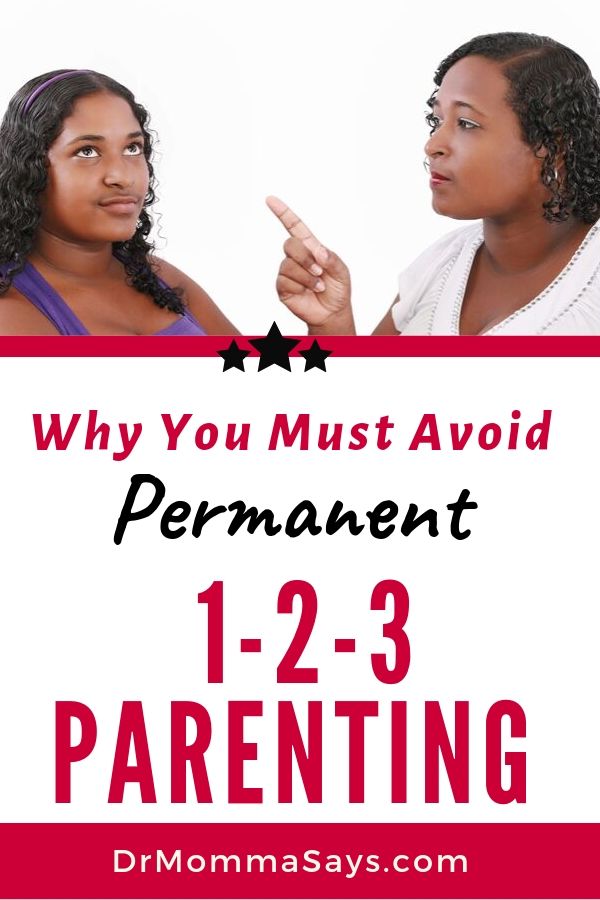 My daughter was put in time out during preschool. She then learned her unacceptable behaviors meant she had to sit in a chair in the corner for some period of time.  When did I know that it was absolutely not working for her? When she put her chair in a corner and proceeded to do the unacceptable behavior before running to sit in her chair.  She then cheerfully told me that she was in time out.  Whaaat? Just no.

I feel this can be true for all parenting techniques. Although I never used the 123 parenting method, many parents did. I was too busy figuring out how to raise too completely different kids, and the internet was not readily available, so I was making it up as I went. But now, sitting on the other side of the fence, I can see the parents who need to acknowledge that 123 parenting is no longer working for their child.

First, did you know there is an actually recommended method to 123 parenting? I didn’t. Just saw parents stop what they were doing, bend over to their child and start counting while holding up fingers.  Well, the actual technique was popularized by a psychologist who coined the phrase 123 Magic Parenting.  However, many just use the counting method in their own way, which may be why I see the issues that I do.  They may be missing that little magic.

The books were initially published in 1995 but that was before the internet became all the rage.  So, parents, had t rely on word of mouth or a trip to the library.  Now, these books have made a huge come back with easy online access to everything.  Although I have never read his books,  one mommy blogger wrote a pretty good post about some problems associated with 123 parenting.

So what kind of issues have I personally witnessed with this technique not appearing to be effective? Well, just recently I saw a 10-year-old, ignoring mom who was saying to put down the phone.  The child just laughed while continuing to play and obviously enjoy the phone game.  Mom then proceeded to raise her voice, lean toward the child and hold up fingers while saying 1-2-3.  Only after hearing 3 did the phone get put down. 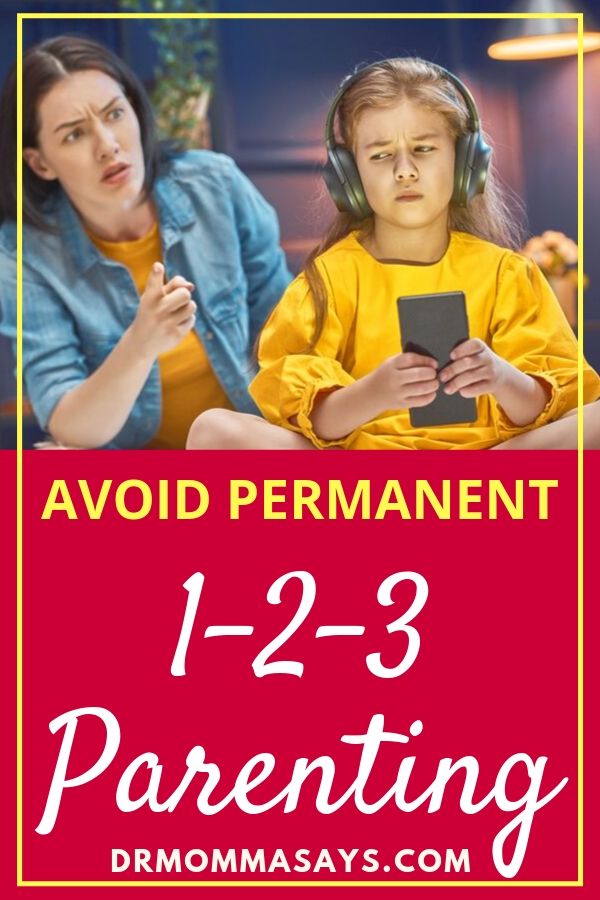 If you have been doing this for 10 years, at what age do you think the child will learn and rise to your expectations? Or have they simply learned that they can do what they want for longer periods of time? Does your child now expect teachers and other adults to give them this same grace period before following the rules?

My daughter had a teacher who used a similar reinstruction method, and she gave repeated reminders on a daily basis before assignment due dates. Who could forget? When was it going to be her responsibility? When would my child learn to be self-sufficient? Well, not until her next teacher gave an assignment and without those reminders. The due date came. My child was not ready and earned a bad grade…which earned some kind of response from me! Just saying, I consider school to be a child’s job and it was to be taken seriously.

My daughter said it was not fair because the teacher did not give reminders. And that was the day that she learned that she had to be accountable for herself. It really is not anyone else’s job to constantly remind her and give her more time to comply. This is growing up and learning responsibility.

As an employer, I have hired young adults who needed these reminders. Who has time for that? They expect warnings and reminders. Nope. Clearly, it did not work out well for them. Parents do not want to raise kids who need others to be responsible for their actions. Thus, permanent 123 parenting should not be a thing.

I do not think parents need to be giving 3-second warnings to correct behavior from toddlers to teens. What is your cut off? Everyone may have a different time table but there should be one. If it is not working and helping your child to be responsive, perhaps another technique should be tried.

Isn’t the ultimate purpose to teach kids to listen the first time? Not just let them laugh and think “Weeeeee! She’s not serious!”

No one else is counting down for your child. They expect results. They expect your child to listen.  Another post shares more details about problems that can result from having a permanent 123 parenting technique.

Don’t get me wrong, I am not mom-shaming or suggesting there is a “best” method for parenting. Should-free parenting is a method one of my physician colleagues discusses where parents are overwhelmed with what they “Should or Should not” do. She shares more about this in her Psychology Today column and in a Ted Talk.

I also have shared why parents need to embrace “afraid parenting” because it never ends!

I am saying that it is great to go ahead and do what you feel is best for you and your family. But be honest with yourself.  Is it working? No matter what anyone else says, you must be honest.  If it is not working, then make a change. It is not a mistake, it is just parenting.

Parenting is an active sport, and we must react to what happens. The best-laid plans may not work, so simply change the plan. Do not just stick to the plan just because it sounds good or works for others. This is not good for you or your child.

So here is the tip that answers the title of this episode: How do you avoid permanent 123 parenting? By setting your own schedule to stop.  Whether it is an age or just a timeline.

Kids are smart and are teachable. The question is, when are you going to teach them that you have different expectations? You can stop cold turkey, you can wean to “1-2 parenting” or just begin substituting other methods.  But let’s all please agree that permanent 123 parenting should not be a thing. 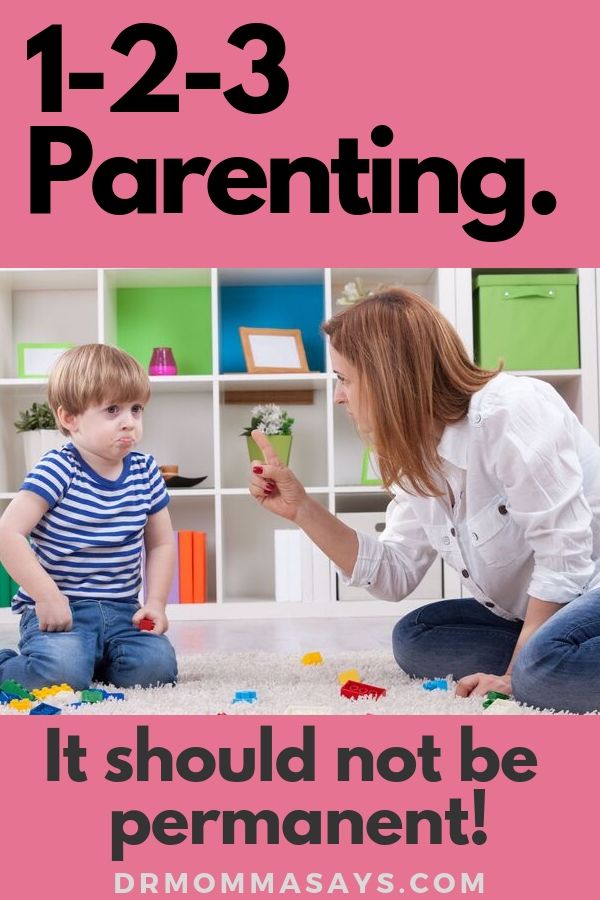 Differentiating Earache Causes: Hint, They are not all Ear Infections

Top Tips to Save Money on Halloween Costumes

No images found!
Try some other hashtag or username