Home What the HECK is Glue Ear?

What the HECK is Glue Ear? 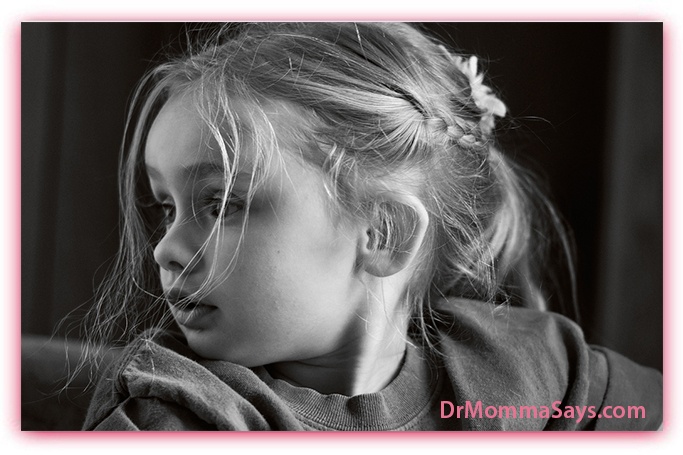 Dr Momma Says
What the HECK is Glue Ear?

Today’s episode is going to be talking about something called glue ear.  It is important for everyone to understand what physician’s mean when they give a diagnosis because sometimes, it is used to mean different things. I belong to Facebook groups about ear infections. and some of the descriptions of symptoms are not what I consider to be glue ear.

Why does fluid get trapped behind the eardrum? 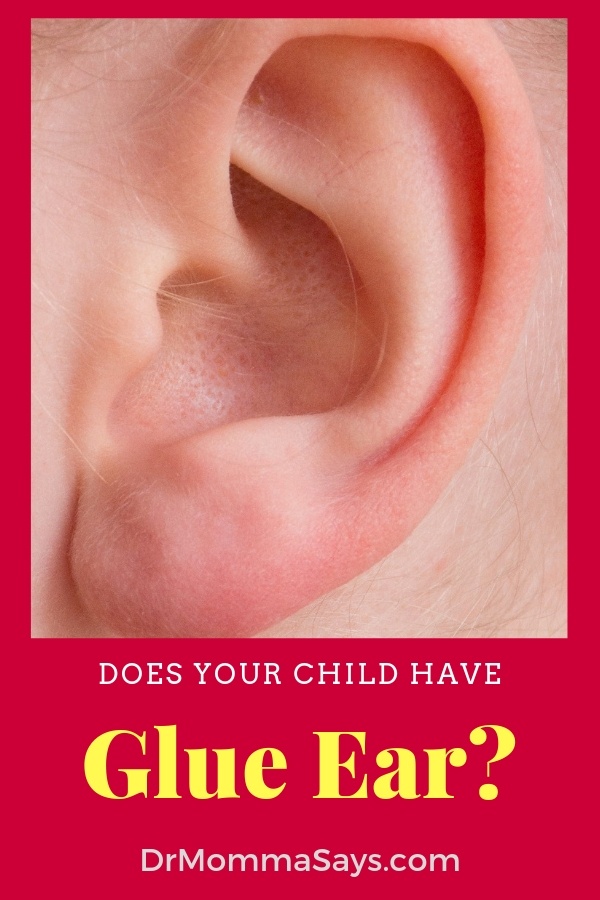 I am a Pediatric ENT surgeon and spend a large part of every day discussing ear infections and middle ear fluid. I love sharing this information, so I created several blog posts to share ear infection myths and complications as well as treatment options, like ear tubes.

The eustachian tube connects the space in the back of our nose to the middle ear. Every time we have a stuffy nose from allergies, sinus infections or other nasal problems, the eustachian tube may swell up. It can feel like the ear pressure we feel when on an airplane with a stuffy nose. But if the swelling does not go away, the lining of the middle ear produces fluid which remains trapped behind the eardrum.

Fluid behind the eardrum is extremely common, and most of us have had it in the past.  Because young kids have so many viral illnesses each year (sometimes as much as 6-8 times a year), there are more chances for middle ear fluid to get trapped.

Bacteria may grow in the fluid and lead to an acute ear infection. These acute infections are often extremely painful and may need to be treated with antibiotics. However, if fluid just stays trapped behind the eardrum, it can become thick and cause hearing loss.

Glue ear is simply mucus trapped behind the eardrum.  I’ve already written about mucus and described how wonderful it is for a body. But when mucus becomes excessive, it can cause problems.

It is normal for fluid to remain in the middle ear for a few weeks after an ear infection.  Most of the time, the fluid drains back through the eustachian tube. When fluid continues to sit behind the eardrum after 3 months, it becomes thicker can turn into glue ear.

Once the fluid becomes very thick, it is very unlikely that it can drain on its own. Glue ear can affect one or both ears. It can happen after an ear infection or it can happen on its own.

Otitis media with effusion (OME) is the medical name for normal fluid trapped behind the eardrum. I do not consider all episodes of middle ear fluid to be glue ear even though many other physicians do. As a surgeon, I separate the types of mucus into different categories with different consequences.

You may hear people say glue is present every time they find middle ear fluid; however, I believe glue ear is a much more severe collection of middle ear fluid that requires the most aggressive treatment.

What are the symptoms of glue ear?

Trouble hearing is the most common symptom of glue ear in kids.  The amount of hearing loss in children can vary, but generally, kids feel like they have earplugs on and sounds are muffled.

However, some kids do not complain at all, and the problem is found when they fail a routine hearing test at school or the pediatrician’s office. Some kids end up getting a hearing test because of behavior, learning or focus problems in school.

Because hearing loss in kids may not be obvious, these are some common hints that it is present:

Adults also get glue ear,  and they will also complain of pressure deep in their ears, actual ear pain, and tiredness from overall discomfort.

How does glue ear get diagnosed?

Glue ear is diagnosed with an ear exam at your physician’s office.  We use the basic otoscope, a magnified scope with a light attached, to it to look inside the ear. 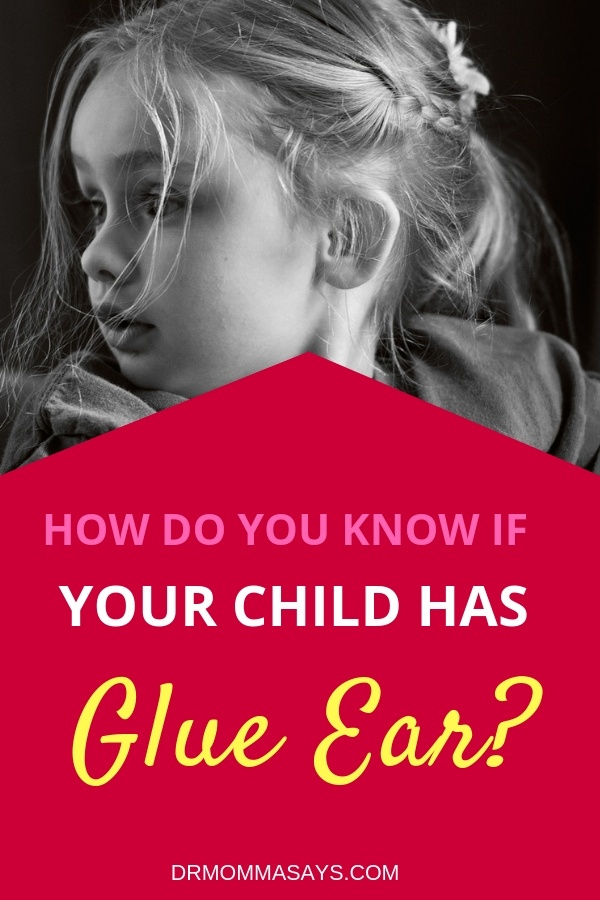 If ear wax is present, it may need to be removed so the eardrum can be examined for swelling, redness and the type of fluid that is present. When we see air bubbles, this means the mucus is thin and watery and some air is still coming into the eustachian tube. This is what I call happy fluid!

Thicker middle ear fluid is often associated with a white eardrum, due to swelling and increased thickness of the eardrum. When glue ear is suspected, I see the fluid turning an amber color.  The longer fluid in the middle ear, the more changes may happen the to eardrum.

Sometimes, pediatricians and family physicians can do a quick test called a tympanogram to test to see if fluid is present.

It’s important to know that nerve damage hearing loss is not typically associated with glue ear. However,

What can I do to help if my child has glue ear?

A child with glue ear may not be able to hear you well. While waiting for the fluid to resolve or to have surgery, it is helpful for family members and teacher to speak slowly and clearly to your child.

Allowing your child can see your face when you talk is also a good thing to do because many kids with hearing loss become very good lip readers.  It can be helpful to get their attention by clapping your hands or calling their name before you speak to them. 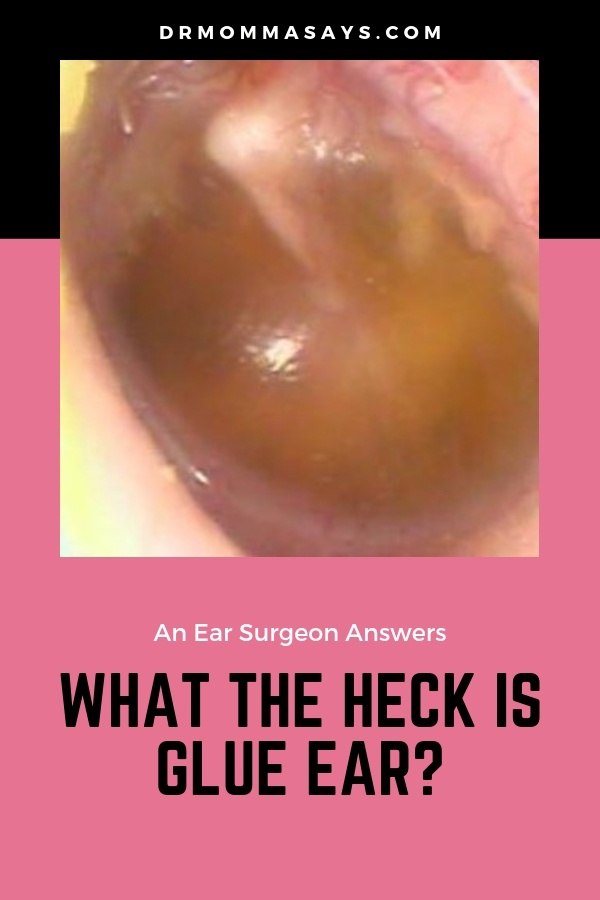 The most common treatment of glue ear is the placement of ear tubes. The mucus can be soo thick that it is hard for me to suction it out of the ear.

Anyone with chronic nasal symptoms may develop glue ear; however, it is very common in kids with chronic eustachian tube dysfunction due to structural problems. Children who have cleft palates, Down Syndrome, Cerebral palsy and other developmental problems are much more likely to need multiple sets of ear tubes because it can take years for their eustachian tubes to begin to function properly.

Sometimes in advanced cases with permanent eardrum damage, people may need a complete rebuilding of eardrum with a tympanoplasty. But always remember, if the eustachian tube dysfunction is not improved, the problem will continue to recur.

While middle ear fluid can present serious complications, this common childhood condition tends to resolve on its own in many cases. It can take as long as three months to fully clear up, and as the fluid drains, hearing problems tend to resolve.

Remember that all fluid needs to fully resolve, even if it seems to be improved.  Long lasting middle ear fluid can progress to glue and then onto problems that leave the eardrum permanently damaged.

If the glue ear keeps coming back, or if it lasts for longer than three months, you may need to see an ENT surgeon to prevent long term problems. You may want to read ways to treat and prevent glue ear which can help avoid severe complications.

How to Avoid and Treat Severe Afrin Addiction

Hi Dr. Burton, thank you for sharing your tips and expertise! I feel like I stumbled across your post at the perfect time. I am an adult, and I recently started feeling pressure in one of my ears. I had a cold a couple of weeks ago, so I’m thinking there may be fluid trapped in my ear. It’s not very painful, just uncomfortable, so I don’t think it’s infected. Is there any medication you would recommend, or any treatment options I can do at home to help flush out the fluid? Thank you!

Yes nasal symptoms commonly block the Eustachian tube and give symptoms like yours. Many people work on treating their nose with saline washes, allergy meds. You can read more of my blogs about the great things salt water nose washes can do. But if you remain concerned you should see your physician for an accurate diagnosis.

Dr B,
I just had a beginning of a cold and the doctor didn’t see anything in my ears but a a day after i began to feel my ears to swell and not to hear well., like as if i put something in it.(im a teenager) I already put nasal medecin but I’m afraid of it being an infection. What should i do?

Hello,
I cannot give specific medical advice but can help you understand what is going on in your body. Your nose symptoms have blocked your eustachian tube, which allows air to get behind the ear drum. When there is not enough air, you get pressure, pain or hearing loss. You can read my posts about basic ear infections to understand how that happens. You can also read some of my posts about nasal congestion, allergies and mouthbreathing. You can also check out my posts about treating allergies and using nasal saline. Your ear often does not get better until the nasal symptoms resolve. Along the way, you could end up with an ear or sinus infection so if your symptoms worsen, be sure to checkin with your primary care physician. Hope you feel better.