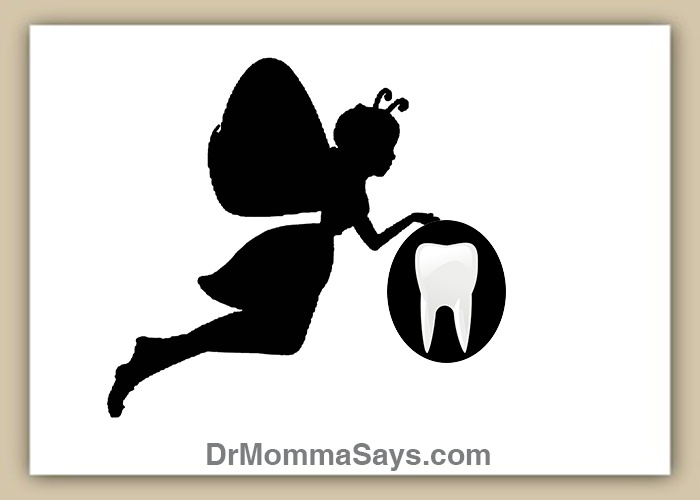 Childhood milestones are special and memorable for families. Losing that first tooth ranks as a pretty special day! But tooth fairy drama can be real and parents should be prepared to handle it.

I love some of the creative ideas people have come up with to make the tooth fairy events more fun.  Even more impressive is this list of notes that you can print and give to kids. I wish I had been that creative!

But whether you leave fun notes or create certificates, in end, most kids are looking for some money. That has been the traditional tooth fairy gift.

When my daughter lost her first tooth, she was so excited. But it was such a struggle to get the tooth out. We had to wiggle it a little each day while it dangled mercilessly. The idea of actually pulling it out of her mouth was overwhelming; so, we all waited and watched and touched it from time to time.

How did that tooth eventually come out? Well, she had a super cool principal who came to the lunch room and sat up front every day. He asked if anyone had a loose tooth that wanted him to take it out!

Kids lined up! I think this was a type of peer pressure that helped my daughter get over her fear of losing a piece of her body.

I was speechless when my daughter, who had been so dramatic about us touching that tooth, was a trooper and allowed her tooth to be pulled in front of everyone! (Please remember, this was the 90s! I know probably no one is allowed to touch kids’ teeth anymore. It was a different time back then).

Anyway, this tooth pulling experience was the beginning of my child bringing home of teeth in paper towels! Sometimes, I was not even aware that the tooth was ready to come out.  It was almost bragging right for the day to have teeth pulled during lunch.

I still remember her excitement about putting the tooth under her pillow and waiting for the tooth fairy to come.

It starts off innocently when you give your child 25 cents, 50 cents or one dollar. But you are a new mom and have not been down this path before.

As you smile, you think to yourself “this will be fun”. You might even coat your coins or dollars with magic fairy dust!

You are completely unaware how competitive life can get as soon as your child begins to share the good news that the tooth fairy came to the house. This is when the tooth fairy drama may begin.

I strongly believe that kids need to be taught gratitude. You know as a mom that you cannot “out mom” the super mom you see at school. Let her be super, and you can just be you. You have learned to be grateful for the gifts that you have.

Well, kids are often not yet capable of “taking the higher road” or ignoring inequalities. This is your job as a parent to teach them.

However, when they are in kindergartener, you may not really be ready to tackle some battles. I wasn’t!

My suggestion is that you should find a way to dodge the drama!

Prepare for your child’s reaction to tooth fairy drama

My child was initially thrilled about receiving one dollar from the tooth fairy. Even though there was no fancy certificate or glitter, she was smiling ear to ear when she went to school the next day.

But when she came home, my sweet smiling child was not so sweet and smiling anymore

The other kids got more money from the tooth fairy.

I was not prepared. As a child, I received a nickel, dime or quarter. Adjusting for inflation, I thought a dollar was awesome and generous!  I clearly had not done my research.

Although I was about to launch into a discussion about gratitude and not comparing yourself to others, the broken look on her face was heart-wrenching.

I had to struggle to keep myself from jumping into the “tooth fairy gift-giving”  competition. Most certainly, I wished I had been better prepared.

What did the other kids get?

With her head hanging low, my daughter told me: One girl got $5 and another got $10. They said my tooth fairy was cheap.

What the hell? For a tooth?

I was livid.  I immediately knew that I was not going to be able to prove that our tooth fairy was not cheap or that she was loved just as much as the other kids.  Why was the world so complicated?

End tooth fairy drama by ending the ability to compare!

So, my type A personality kicked into gear. Using my lawnmower parenting skills, I had to figure out some way to soothe my upset child before teaching the lesson that life is not fair. Everyone gets something in life, but it may not be the same as someone else.

The key is to plan. I had failed to plan because I did not know tooth fairy drama was real!

Before the next tooth was lost, I announced that we had heard from the tooth fairy and she wanted us to give a message to our daughter. (I mean, if you are going to play the game, you might as well go all in!)

Because some kids need more money or bigger awards to be happy, she was going to do something different for my daughter. Something special just for her!

In hindsight, I could have just calmly announced that one dollar was awesome and that some people don’t get any money for teeth.  But you cannot parent in hindsight. You must act with what you know at the time, and I felt that inequality is hard to digest at age 5.

I chose to go the route of a “different” path. It is not less than, or better than what other kids got. Because it was different, it was harder to make comparisons! This was one of our first lessons that different is good. Everyone should not all be the same.

So, what was our tooth fairy going to do?

Madam Tooth Fairy was going to leave special presents under the pillow. For most kids, she was going to leave money, but for my daughter, the tooth fairy wanted to take some time to pick out a special gift that would be loved and appreciated!

Suddenly, the Burton Tooth Fairy had gained a little bit of Santa Claus. Boom. Creative parenting at its finest.

I then began going to Target, Walmart and Toys R us (RIP Toys R Us!) and looking through sale bins to find cheap, marked down toys.  This was the beginning of me creating a little treasure chest of goodies, ready to stash under the pillow. I often did not know when teeth were going to come out because the principal was pulling teeth on a regular basis!

This treasure chest also served me well when unexpected awards were needed. Student of the day. A special note home from a teacher describing outstanding behavior or accomplishments. When you find items for a few dollars, it becomes easy to have a spontaneous award ceremony after dinner.

The beauty of gifts is that you can give them whatever you want and because kids have no sense of dollar values. I could give a dollar Polly Pocket accessory or something fancy. (Umm, I just looked up the cost of Polly Pocket now. Oh my! Trust me when I tell you  that in the 90s, I regularly found dolls and accessories on sale for a dollar or two!)

Tooth fairy gifts can target areas that need to be worked on!

I still laugh at one of my favorite gifts. I am a STEM girl through and through. LOVED MATH! My advisor in college had to make me stop taking math since only engineers were in those advanced classes. I was a Biology major going to med school and did not need this complex math! But neither of my girls liked math. Not even a little bit. We have had more than our share of drama due to math classes over the years.

By 2nd grade, it was clear that numbers were not my daughter’s friend. So when she lost a tooth, the tooth fairy left a math Bop-It under her pillow. This is like stone age to you cool people with tablets and tons of learning apps, but back in the day, the Bop-it was cool.

And even though it was math, my daughter was happy because it was a gift from the tooth fairy. She would sit for hours “bopping” that toy which would call out math problems and then bop out the right answer. Getting those numbers into her brain by any means necessary!

Instead of $1, I had placed a $19.99 gift under her pillow. Worth it. And not immediately comparable to other kids who got money. Yes, I heard about teary kids who still had “cheap tooth fairies”, and I was happy to sidestep that unnecessary drama.

If your child is in a location where kids compare tooth fairy love, and you are not strong enough to just stand there and take the hit,  go ahead and use our tooth fairy. The gift giving tooth fairy.  The Santa Tooth Fairy.

This is the ultimate way to level the playing field and avoid the hard talk about inequality at such a young age. The world is not fair and you must teach your kids this.  But in kindergarten? Nah.

I understand that many families do not participate in the tooth fairy shenanigans, but I loved it.  We also took full advantage of all the fun associated with Santa Claus, the Easter Bunny, and Halloween!

Kids love make-believe and finding ways to keep their imaginations alive was a thrill. The serious part of the world lasts forever, but there is only a short period of time where the whole family can participate in these fun make-believe tales.

Why You MUST Call Urgent Care Centers Before Visiting

7 Reasons to Stop Lying to Physicians

3 Stages of Momma Addict Parenting: An...

5 Tips for Awesome Halloween Behavior in...

Help Your Child Thrive by Networking In...